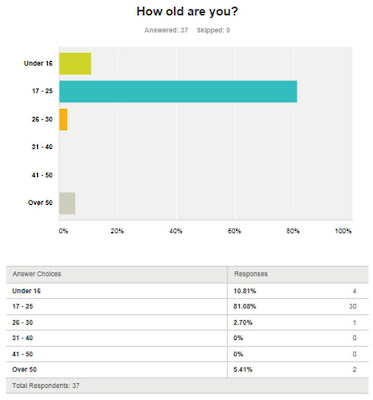 The first question is about age. This question will enable me the range of people answering my survey. I have noticed that it is mainly the younger generation who will take the online survey. It also shows me that the possible of having a younger target audience is more likely than having an older target audience. 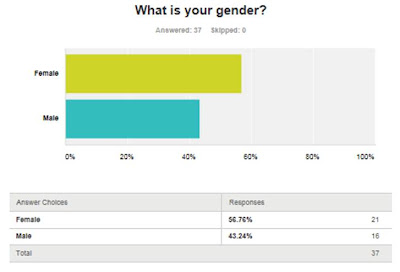 The second question in my survey is about gender. through the 37 responses I got from my survey I have been noticed that 21 of these are female and 16 of these are male. This enables me to notice that the best gender for my target audience is female. 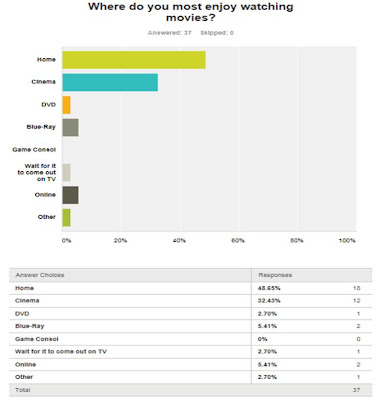 The third question in my survey is about where the audience prefer to watch movies. The top answer for this is Home and the second higest answer is the Cinema. This shows me that when distributing my film, I should put it in selected cinema's and have a short release window to put my films in homes. I could use Virgins on demand service to sell my film at homes. 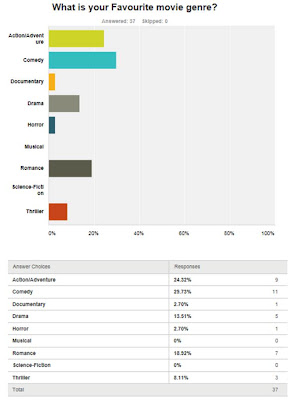 The fourth question in my survey is about the audience's favorite movie genre. Romantic films was the third most popular choice of film. Whilst this looks like bad news for my production company, it has always been that action and comedy film are the most popular genre and so this result isn't a shock for me. This just means that I have to get my target audience correct so that I can attract the biggest viewing figures. 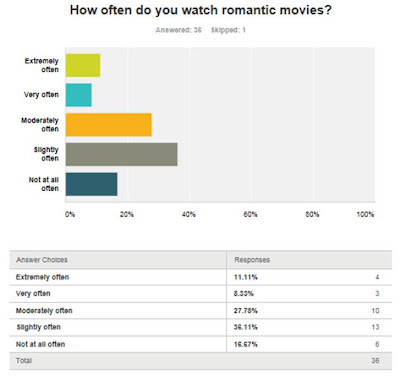 This is the 5th question in my survey. It is asking the audience how often they watch Romantic films. The highest selected category was slightly often with 36.11%. 27.78% of people said moderately often. The other 19.44% said they either watch romantic films Extremely often or Very often. This result isn't a shock for me as I know romantic films are not always the most watched. 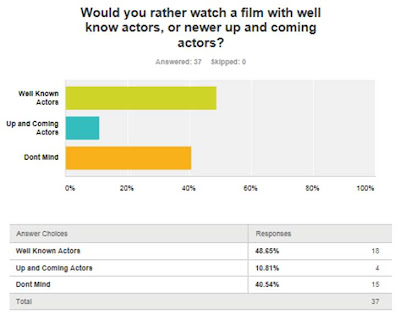 This is a question about what sort of actor the audience would like to see in my film. Whilst 18 out of 37 people said well know actors, the other 51.35% said they Dont Mind or  Up and Coming actors. This means that the audience are happy to see new talent, and in my opinion this is great news for my film as with our budget it would be unrealistic that we would have a well know actor.